THE NEXT BIG THING! 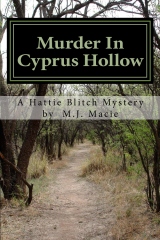 Today I'll be answering 10 interview questions about my current work in progress. At the end of the article, I'll tag 5 other blogs for you to check out and possibly follow. Thank you so much Tina Klinesmith for the opportunity to spread the word on my next book as well as share links to other great authors.

THE NEXT BIG THING!

1.  What is the working title of your book?
So far, it’s MURDER ON FOLLY BEACH. Of course, that will probably change. It will also take place in Cyprus Hollow. That much I know for sure.

2     2.   Where did the idea come from for the book?
This is the second book in the Hattie Blitch series. I’d have to say the idea came from the first book and my plan for a new setting. The idea for the first novel in the series came from my desire to write a contemporary Christian novel using a SC plantation as my setting. I plan most of my setting for this second novel to be on Folly Beach.

3. What genre does your book fall under?
My book falls under the mystery genre, however it is a contemporary Christian mystery.

4. Which actors would you choose to play your characters in a movie rendition?
I would choose Rachel Weisz  to play my amateur sleuth, Hattie Blitch, and Russell Crowe to play Sheriff Skyler Blitch.
5. What is the one-sentence synopsis of your book?
To state it boldly; this novel is about Christians behaving badly.

6. Will your book be self-published or represented by an agency?
All my novels are print-on-demand through www.createspace.com.  I once thought that was the same as self-publishing but have learned otherwise. Print on demand means a copy of the novel isn't printed until a buyer requests it.

8. What other books would you compare this story to within your genre?
I would say it comes closest to Terri Blackstock’s, Cape Refuge Series.

9. Who or What inspired you to write this book?
I’ve had a desire to write for most of my life. I’ve already written three novels of psychological suspense when I felt the pull (the Lord) lead me to write the Hattie Blitch series. This series started out as a psychological thriller, when all of sudden I noticed the characters were taking over and it was developing into a mystery. So, I prayed and let the characters have their way.

10. What else about your book might pique the reader’s interest?
Well, let’s see. We have a murder which means we have a whodunit puzzle to be solved. Add to that the book is appropriate for young adult as well as mature readers. Oh, and we have some Christian characters facing real-life contemporary problems, whose lives are changed by their faith.
I'd love to hear your comments.

Now, check out these links and let's see what the Next Big Thing will be.

This week I’m reposting a blog from writer Jody Hedlund jodyhedlun.blogspot.com. Her July 19, 2012 blog perfectly states what is important about character development when writing a novel.

Over the past week, I’ve been reading a couple of books that I’m enjoying. But for some reason, neither of the books completely wowed me. I wasn’t totally invested in the stories.

Sure, I kept reading each of the books because I liked the plots. But I knew something was missing—something that could have turned these great books into awesome books.

So, of course, I began to think about what it takes to create MC’s that can grab readers within the first quarter of our books. What are the kinds of traits we can give our MC’s that make our readers fall in love with them right away?

Here are three key ways we can develop reader empathy for our MC’s early in our books:

1. Have them care about someone else.

All too often when we’re throwing our MC into the story’s initial conflict and tension (as we rightly should), we make that MC into a self-centered, whiny, poor-me kind of character. We heap bad things upon the character right away (and that’s good!), but in the process we can’t let those circumstances turn them into simpering saps who only care about themselves.

In order to avoid this trap, we can show our MC caring about someone else’s needs above his or her own. Even in the midst of a dire situation, they need to look beyond themselves and notice the plight of someone else who’s suffering. After all, in real life, we aren’t particularly drawn to people who only think about themselves. So why would we be in a story?

2. Have them do something heroic.

It may not be enough to have our character simply feel concern for someone. Yes, it’s a good first step. But if possible, we should have them act upon that compassion.

For example, in the Hunger Games, the author could have focused on Katniss and all of her troubles (which are numerous). We likely would have felt sorry for Katniss because of her hunger, poor living conditions, the loss of her father, etc.

But instead of making Katniss into a poor-me character, Katniss looks outside her own needs to those of her sister Primrose. But the empathy doesn't just stay in her head. She acts upon it over and over. Her compassion for her sister is the driving force behind most of what she does. Until finally, Katniss makes the ultimate heroic sacrifice by taking Primrose’s place in the Hunger Games.

When our characters are compassionate and acting sacrificially, we can’t help but fall in love with them. They grip our hearts. And the story moves us on a deeper level.

3. Bring out their strengths.

No one can empathize with a perfect person. Our characters need to have flaws. Even super heroes have faults that they must deal—pride, anger, false humility, etc. But amidst the problems that anyone person is struggling with, there is always something good in them.

It’s our job as storytellers to bring out that goodness, to show the inner strength of our MC. And even beyond that, we must make that strength larger than life. We need to make our MC into the kind of person we would aspire to be, not who we really are.

For example, in The Doctor’s Lady, my heroine is crossing the continent in a covered wagon. I’ve piled all the elements against her—heat, hunger, disease, fleas, raging rivers, lustful trappers, etc. If I’d been the one riding west, I would have whined and complained pretty much the whole time. And if I’d made the MC to react realistically, the way I would have, then my readers would have ended up disliking her for being so weak-willed.

Instead, I had to make her into the type of heroine readers could respect and admire. I had to focus on her strengths. Sure, she still whined at times, but overall, she handled the rigors of the trip heroically, and thus my readers were able to fall in love with her.

Thanks so much for sharing with us, Jody.

Now, in my latest novel, Murder in Cyprus Hollow, the first in the Hattie Blitch series, my main character, Carolina Carlyle has been arguing with her younger sister since birth. Now adults, they still argue however the reader can see how much Carolina loves her sister and how determined she is to do whatever she has to do to help her.

What about you? Have you shown your main character showing concern for another character’s needs? I look forward to your responses.
Posted by M. J. Macie at 7:13 AM 2 comments: 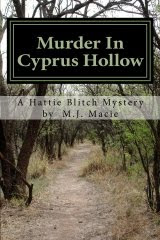 M. J. Macie
South Carolina, United States
Born and raised in Buffalo, New York, I now reside in South Carolina with my husband and family. I gained my writing experience as an editorial services assistant at a small publishing company then moved on to work as a reporter for a local news publication where I covered the crime, public safety and education beat. I also wrote news articles, feature stories and personal profile segments. A graduate of Charleston Southern University, I earned a bachelor’s degree in English Literature and am currently working on my next novel.